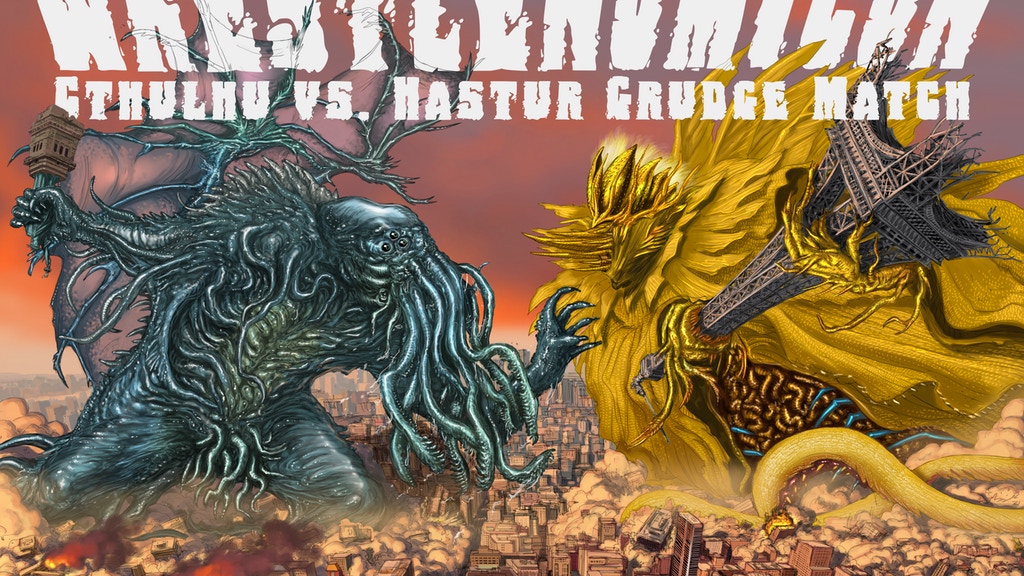 A card game of the Great Old Ones fighting over the end of the world. Cthulhu! Hastur! Only ONE can rule the apocalypse!

Latest Updates from Our Project:

One week to go! It's time to throw this sucker on the mat and break out the folding chairs.

New Bonus Cards: The Deep and the Dead

We are adding two sets of "Servitor" bonus cards: "Deep Ones" for the Cthulhu deck and "The Dead" for the Hastur deck. Servitor cards can be played instead of Cultists, and they have weird abilities that vary from Old One to Old One. We'll tell you more about Servitor cards over the next few days.

Even better, if we unlock decks for more Old Ones in this KS project, each of them gets its own Servitor cards!

If you would love to see Wrestlenomicon on your table, try the new SERVITOR OF THE OLD ONES reward tier. It comes with FREE shipping to the U.S. or a flat, discounted shipping rate anywhere else ($10 to the U.K., $20 to the E.U., or $30 anywhere else, to be charged after the project ends).

No, you don't have a cosmic concussion. The deal is that good. Bump up your pledge, pick the SERVITOR reward, and make Wrestlenomicon happen!

How big are the tarot-sized Wrestlenomicon decks? Here's one of our old Lovecraft paperbacks for scale.

The core game comes with the Cthulhu and Hastur decks plus placeholder cards, rules, and dice. This is one of our beautiful prototype decks.

Wrestlenomicon is justthisclose to 75% funded and there is still plenty of time. So grab your friends. Lock the doors. Cover the windows. Make them back Wrestlenomicon on Kickstarter. Print the DIY kit. Ignore the thunderous blubbering in the sky and the ichor falling like rain. Soon enough, the end will settle around you in a squamous, mountainous bulk. Until then, play Wrestlenomicon!

So bring us your cultists!

Here’s the thing. The team behind Wrestlenomicon has worked on plenty of major card games, but when it comes to publishing, we have focused overwhelmingly on role-playing games. We have won great success in RPGs and won lots of awards. But Wrestlenomicon is our first attempt to not just work on a card game but actually publish it. After all these years, it feels like starting from scratch!

So please join us in making a big push to draw gamers to Wrestlenomicon! From how-to-play videos to blogs to a DIY kit that any backer can print and play, we are doing all we can to show people what Wrestlenomicon is like and what makes it fun. That’s where you can help.

After you back Wrestlenomicon, check out Update #1 for a link to the print-and-play kit. Download it and give the game a try. Tell people what it’s like. Show off your favorite cards.

And meanwhile, join us too in celebrating good news, like…

After Wrestlenomicon ships to backers, we will also mail backers a bonus card for either the Cthulhu deck or the Hastur deck. That’s already going to be fun enough, but we’re sweetening the ichor. The bonus card, either THE NECRONOMICON or THE KING IN YELLOW, will be illustrated by the amazing JOHN KOVALIC!

John and Arc Dream go waaay back. In fact, he was the first artist we talked to when we started brainstorming Wrestlenomicon in the lost aeons of 2002 and 2003. In the years since then, he’s filled his schedule with things like Apples to Apples, Dork Tower, Munchkin, and dozens of games by his company, Out of the Box Publishing. We are thrilled that he agreed to contribute a bonus card to Wrestlenomicon now that it is finally coming to life.

Which deck gets the bonus card? Will John draw a card for The Necronomicon or for The King in Yellow? That depends on which Old One has the most Kickstarter cultists!

Cthulhu’s cultists include backers who selected the “Cultists of Cthulhu” and “Friends of Old Castro” rewards. Hastur’s cultists are backers who picked the “Servant of Hastur” and “Repairer of Reputation” rewards.

If Cthulhu has more backers when the project ends, all backers get a bonus card for that wicked tome, THE NECRONOMICON, for the Cthulhu deck. Great #Cthulhu (@TentacleNecktie) commands that you make your friends join his cult. Don’t let that putrid patriarch, #Hastur (@EatYellowSign), take the crown!

If Hastur has more backers when the project ends, all backers get a bonus card for that evil play, THE KING IN YELLOW, for the Hastur deck. The Hali Haymaker himself, #Hastur, orders that you spread the insidious word to friends and family to join his cult instead. Send #Cthulhu (@TentacleNecktie) back to the watery depths!

Add the Wrestlenomicon Playmat to Your Pledge!

Thanks to the brilliance of artist Kurt Komoda and graphic designer Simeon Cogswell, we can now offer the official Wrestlenomicon playmat as an add-on!

The playmat costs $20. To reserve yours, add $20 to your Kickstarter pledge. (We’ll collect the shipping & handling cost for it after the project ends. We expect that to be about $5 in the U.S. and $10 to $20 overseas, depending on location.)

Download the Putrid Patriarch and the South-Seas Smasher for your phone or tablet! And don’t forget to inflict them on your friends.

More from Rob Heinsoo! He says: “Three of the card games I’ve designed are somewhat similar to Wrestlenomicon’s style, play time, or ambition. Here are notes on fun elements of Three-Dragon Ante, Inn-Fighting, and Epic Spell Wars, and how those elements compare to what’s going on in Wrestlenomicon.”

Read it all at his blog:

We need to hit our main goal of $20,000 to print the core set of Wrestlenomicon, but further expansion decks are what everybody wants to see. We hear and obey.

When we hit $25,000, we’ll add the deck for NYARLATHOTEP, the Crawling Chaos—and every deck will come with 70 cards plus cultists instead of 60!

When we hit $30,000, we’ll add the deck for YOG-SOTHOTH, the Key and the Gate—and every deck will come with 80 cards plus cultists!

Here’s what Rob Heinsoo has to say about these new decks:

“Nyaralathotep messes with the opponent's plans with 'Mastery' cards that slam their own type of attack as well as their usual target. For example, Nyarlathotep’s Bizarre Mastery card Nyarly Don't Surf slams Bizarre as well as Dominant. And while Nyarly's attacks and permanents slow the enemy down, Nyarly is busy building a pyramid of cards! Each attack that hits Ground Zero adds another block to the pyramid. Cap the pyramid off and your enemy is gonna get capped.

“Yog-Sothoth plays from two angles with Twister cards that can use their Momentum to move its cards backwards on the track, looping all the way around to the start. Meanwhile Yog-Sothoth has 'Groove Thang' cards (When a Singularity & Matter Love Each Other Very Much, or Let's Smoke a Bowl of Antimatter) that mess with the enemy all the way down the track. Groove Thang cards generate random aggressions that are printed on Yog-Sothoth's Cultist cards. Trigger a Groove Thang ability, draw a YS cultist and see what grooved.”

When we add those decks, we’ll also expand the rules to include three-player or four-player games! But we’ll talk more about those later.

So let’s make it happen. Tell your friends to back Wrestlenomicon now!